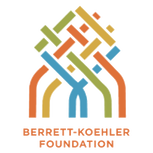 ​This is the story of how the Berrett-Koehler Foundation began…

In the fall of 2012, the Berrett-Koehler Publishers Board of Directors decided to investigate the feasibility of creating a new affiliated organization that would further the BK mission of creating a world that works for all.
The impetus for this investigation came from Berrett-Koehler President Steve Piersanti, based on his belief that the current BK for-profit business model could not accommodate many of the activities that would help achieve the BK mission and exploit the power of BK’s intellectual capital and distinctive practices.  A nonprofit organization would be able raise funds from donors who would not expect a return on their investment.
A nonprofit organization would have three potential benefits:
​However, it was not clear what should be the specific focus of this new organization and would it  add real value in the world, rather than duplicate services of other nonprofits, potentially competing with them for funding?

A Feasibility Study Team  [Steve Piersanti, Si Kahn, Charlotte Ashlock, Mal Warwick and Jesse Stoner (facilitator)]  was formed with the charge to investigate the following questions:
​Over the next three months, the Feasibility Study Team conducted extensive research.
See the Research Report for a detailed description of the methodology and findings.
​The research conclusion was that there is a real need that a BK affiliated nonprofit could serve:

​ How Should the Organization Help Emerging Young Leaders?
The Design Team identified the following criteria for the organizations services:
The Initial Service Delivery Vehicle Identified
Based on the Criteria for Service Delivery described above, and after considering multiple possible approaches, the Investigation Team determined that the best place to start should be though providing awards or fellowships to emerging young leaders who have an idea for a project. The young leader would be supported by an author with expertise in their focus area, and would also receive staff support, connections with other young leaders with common interest and some financial support.

Young leaders would shape their own individualized learning programs rather applying for a specific program offered by the organization.

In an effort to be inclusive and to keep options open, the Feasibility Study Team presented six possible delivery vehicles to the BK Board in January 2013.

The Feasibility Team became a Design Team charged to:
​The decision on whether to proceed with hiring staff and initiating the organization would be determined after there was more clarity on viability.

Through further discussions after the board meeting, the best of the various approaches to service delivery were combined and further refined for discussion with BK authors.
BK Author Feedback the Delivery Vehicle
In early February, 2013, Steve Piersanti and Jesse Stoner held three one-hour teleconferences and one individual conversation with a total of 13 current and former BK Author Co-op board members.

There was enthusiastic support by all authors for both the Focus and the Delivery Vehicles shared with them.  Several authors volunteered to work further on designing the organization and everyone indicated they would like to participate once it begins.

Everyone was supportive of the approach to pair young leaders with expert authors and to provide awards for action-learning projects, where the young leader is supported by the Foundation staff during the application process, through connecting resources, and by providing support throughout the project. There was also interest in the idea of the sponsored young leaders connecting with each other as learning cohorts and possibly also connecting the sponsors with each other. There was also some interest in the idea of an online learning academy, similar to the Khan Academy. The idea of combining the two approaches came up several times. And it was suggested that the awardees could make videos of what they learned as part of their “give back.” The videos could teach concepts but would also have an emotional appeal as they would be talking about their personal experience, and it might be more appealing to other young people to view people their own age. This idea seemed quite promising.
Decision to use an awards or fellowship approach
Based on the author feedback and additional interviews, the awards approach was fleshed out further. See Project Awards for a detailed description

​A planning meeting was held on March 14, 2013 at the Berrett-Koehler offices. It was attended by people representing a variety of perspectives and backgrounds and included Katie Sheehan, Catherine Nomura, JuanCarlos Arauz, Lloyd Nimetz, Stewart Levine, Steve Piersanti, Mal Warwick, Charlotte Ashlock, Brian Williams, Julie O’Mara, Jamie Showkeir, Jennifer Kahnweiler, Marilee Adams, Si Kahn, and Lilian Akumu. The meeting was facilitated by Jesse Stoner.
The purpose of the meeting was to think together about how the organization should operate and the process for creating it. Feedback included:
As a result of feedback from the meeting, the Design Team decided to:

​Online Survey Results: We Have a Name!

​In late March, 53 people, representing a variety of constituencies completed an online survey, giving feedback on the name of the organization, best ways to describe the purpose, and how they would like to be involved in the future. As a result of the feedback indicating that it was desirable to use Berrett-Koehler in the name and that it was a good idea to keep the name general to allow for future options, the name that was selected is: Berrett-Koehler Foundation.
Legal Firm Selected
After research and discussions with three firms, an agreement was made with the firm of Adler and Colvin in April.
BK Shareholders Meeting & Strategic Planning Event
As a result of the interest and support in the community, we decided to proceed with incorporating, applying for charitable status and to initiate a fundraising campaign.

In June, we presented to the BK Shareholders Meeting and also held an “Open Space” session during the Strategic Planning event. Both of these were well-received and feedback led to additional refinement.
Pilots – A Rapid Prototyping Model
During the summer, several pilot projects were designed, a Fundraising Committee was set up, we obtained a fiscal sponsor to accept tax-deductible donations on our behalf until we our 501(c)(3) status is approved, a Services Committee was set up to determine the application and selection process for the projects, and we established the Board of Directors.

During an “Open Space” session during the BK Author’s Retreat on how authors would like to be involved, several authors said they like to donate time to working with young leaders, but needed help from the BK Foundation to connect with them.

We initiated four pilot projects for rapid prototyping. (See News for descriptions of each of the pilots.)

The Services Committee evaluated the results of the projects and made recommendations that refined the services offerings and established the processes for application, selection and evaluation of action-learning projects.
Final Steps in Establishing the Foundation
In December we established an Advisory Board to provide advice to the Board of Directors on the strategic direction of the Foundation.

In December 2013, the Berrett-Koehler Group Board of Directors voted to support the Foundation with 10% of pre-tax profits for three years and to provide a representative to sit on the Foundation board.
Support Us